skip to main | skip to sidebar

Heather and I went to 1776 this evening and, for the most part, had a good experience. Our one complaint was the family behind us. 1776 is a pretty long musical and their three kids just didn't have the patience to sit through it. Actually, they weren't too bad. But they did proceed to eat several packages of candy during the first 10-15 minutes of the show, and talk out loudly to each other, asking questions and the like.

Heather and I agree that it's great to expose your children to fine arts at a young age. However, parents should at least try to teach their kids appropriate behavior before you arrive at the show, and insure the kids are acting appropriately during the show. Also, maybe the parents should have waited for "The Music Man" which arrives next week, a much more family friendly show (there are plenty of kids in the show).

Did Verizon scam Pennsylvania?
Check out this article from dslreports.com and decide for yourself... This is absolutely ridiculous! I want my $785 back!
Posted by Matthew at 11:54 PM No comments:

The Pirates at PNC Park

Heather and I went to a Pirates game last night with her firm. It's the first time I've been to PNC Park and the first baseball game I've been to in seven years (the last? Mississippi State v. South Carolina at the SEC Tournament). We had a good time, although I'm not sure if it's something I'd make a habit of... I've never been a big baseball fan anyway, if you couldn't tell. Anyway, the pirates lost. Here's a Post Gazette Article on the game: http://www.post-gazette.com/pg/04172/334941.stm

Posted by Matthew at 2:39 AM No comments:

Posted by Matthew at 1:28 AM No comments:

Venus and the Chromosphere

Check out this image from the Astronomy Picture of the Day Blog! 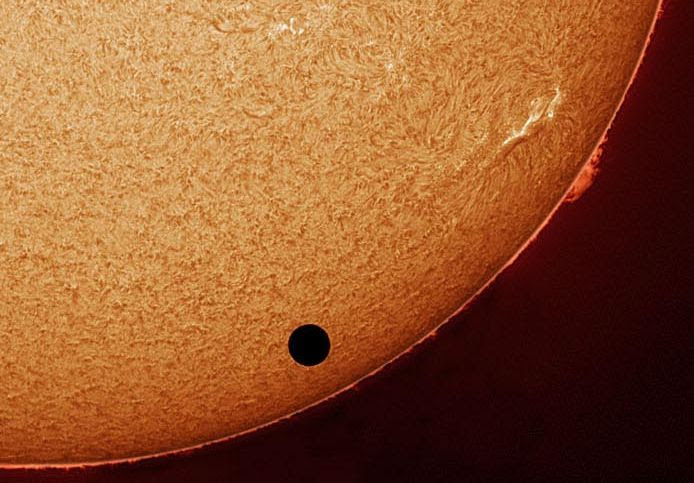 Explanation: Enjoying the 2004 Transit of Venus from Stuttgart, Germany, astronomer Stefan Seip recorded this fascinating, detailed image of the Sun. Revealing a network of cells and dark filaments against a bright solar disk with spicules and prominences along the Sun's limb, his telescopic picture was taken through an H-alpha filter. The filter narrowly transmits only the red light from hydrogen atoms and emphasizes the solar chromosphere -- the region of the Sun's atmosphere immediately above its photosphere or normally visible surface. Here, the dark disk of Venus seems to be imitating a giant sunspot that looks perhaps a little too round. But in H-alpha pictures like this one, sunspot regions are usually dominated by bright splotches (called plages) on the solar chromosphere.


[Astronomy Picture of the Day]

Posted by Matthew at 1:00 AM No comments:

Dining at Lucca in Oakland

Since my blog is new and still somewhat experimental I thought I would write some thoughts about the different things that happened to me for the day. An online diary in a way, but I'll try to make it more interesting. Today's big event, other than BarBRI, was a nice dinner out...

So, Heather and I went to Lucca this evening for dinner. The atmosphere was really nice and we chose to sit on the outside patio. We've heard the food was quite good (see the below article), and were eager to try it for ourselves.

The result? I can't help feeling like we were a bit ripped off. The food was cooked in that "ultra-gourmet" fashion which I don't really care for, consisting of small portions of highly decorated, but not very tasty food. Heather ordered some giant scallops which she liked. However, the accompanying mango sauce was no bigger than a half-dollar size spot on her dinner plate. She said she didn't mind, but I felt kind of bad for her as she had to really ration the stuff to make it through her meal. I was going to order the lamb chops, but was told there was no substitute for their pureed mashed potatoes (I don't really like mashed potatoes of any type). Instead, I chose the pork chops with couscous and zucchini. They were ok, but somewhat bland. I was going to add some pepper, but the restaurant doesn't have pepper shakers at the tables! Only salt! I guess they don't want anyone to spoil the way the meal is supposed to taste. Well, I gave it a taste and determined it needed some pepper, so deal! ;-)

We both ordered dessert, although they were out of the one I wanted. The two that arrived were tasty but petite. I guess I'm just so used to having tons of food on my plate when I go out to eat... I'm not used to being hungry when I'm ready to go.

I guess the ripped off part came along with the bill. Our two meals were about $28 each and the deserts were $7 each for a total of $70 before the tip. Now Heather and I have eaten out several times where the bill has been this high. But those other times all featured very high quality and filling food, some appetizers, some drinks, etc. In this case, I felt like the food was merely ok and definitely didn't warrant the high price. Maybe I'm not refined enough, but I prefer my food to taste good rather then look good.

It's a shame actually, because I really liked the atmosphere and ambiance of the place. However, I really can't justify spending that much money for a meal which is merely ok. I'd recommend going elsewhere.

Anyway, the Post-Gazette had this article on the same restaurant. They apparently loved it...
Choices at Oakland spot delight food and wine connoisseurs
Posted by Matthew at 12:24 AM No comments:

New Horizons
Another one of NASA's ambitious projects, New Horizons is set to launch to Pluto in 2006. As Pluto is the only planet we have never visited, I think this would be an awesome project...
Posted by Matthew at 6:43 PM No comments:

Email ThisBlogThis!Share to TwitterShare to FacebookShare to Pinterest
Labels: NASA

Jupiter Icy Moons Orbiter
One of my hobbies is astronomy... Armchair astronomy might be a more appropriate description. I don't own a telescope, and the light pollution from Pittsburgh makes it difficult to see much in the night time sky. However, I was really excited to see this proposed mission to Jupiter, which includes an intensive study of Europa. Scientists believe that if there is life in the solar system somewhere besides Earth, it's in oceans underneath the glacier that is Europa's surface.

Email ThisBlogThis!Share to TwitterShare to FacebookShare to Pinterest
Labels: NASA

NPR : Simon and Garfunkel, The Interview

NPR : Simon and Garfunkel, The Interview
Speaking of Simon & Garfunkel, Here's a good audio interview from NPR...
Posted by Matthew at 6:29 PM No comments:

Simon & Garfunkel still fresh after all these years

Simon & Garfunkel still fresh after all these years

Heather and I went to the Simon & Garfunkel concert in Cleveland last October, although we passed up the chance to see them here in Pittsburgh. The ticket prices were almost double what we paid and we had already seen the concert.

However, it was a GOOD concert and something that we both enjoyed. If you get a chance to see them, I'd recommend it...
Posted by Matthew at 12:40 PM No comments:

Things every person should know - #1

You know, I think one day I'll create a list of things every person should know... One of the first things on my list involves getting arrested by the police. Now, you may never be arrested. I've never been arrested myself. But the one thing that every American should know if they get arrested is this: SHUT YOUR MOUTH!

There's a reason that the police have to give you a Miranda warning. You have the right to remain silent. Anything that you say can and will be used against you in a court of law. Don't say anything except to ask to speak to a lawyer. In fact, that's the only thing you should say. Once you speak to a lawyer, the police and everyone else MUST LEAVE YOU ALONE. They can't talk to you without a lawyer present at all. Once you ask for a lawyer, keep your mouth shut. You can answer the basic questions like your name and address when you're being booked, but otherwise don't talk about the case, regardless of whether you are innocent or guilty. If you're being arrested, something went wrong somewhere and you want to have all your ducks in a row.

The interesting thing about Miranda is that even know most people know about it from tv and know that it's one of your supposed "rights", your Miranda rights are very easily waivable. All you have to do is start talking to the police without your attorney present and you waive it, even after you've requested an attorney or asserted your right to silence.

I am the webmaster of the this website in my spare time. Eamon is a text based RPG originally designed for the Apple II computer back in the early 1980s. The unique thing about Eamon is that the common person could sit down and design their own adventure for others to play. This allowed the system to expand to over 250 individual adventures; greater than number of Infocoms. However, since these are amateur efforts, most of the individual dungeons do not match the same quality as an Infocom adventure.

Eamon is pretty much a complete project and I doubt that anyone else will develop much for it. I wrote one of the last Eamon games, "The Sword of Inari". You can play it online using JAVA at http://www.eamonag.org/java/Java-246.htm. The rest of the Eamon world has pretty much ground to a halt. However, I'm quite proud of the website and the way it looks and would invite everyone to take a visit!
Posted by Matthew at 5:26 PM No comments:

Random thoughts about life and the world in general...

Welcome to my blog! A bit about me is probably in order... I grew up in Alabama, but I currently live in Pittsburgh, Pennsylvania. I just graduated from law school at the University of Pittsburgh and will be taking the Pennsylvania bar exam in August.

Because of this, there is no guarantee that I'll be posting very often, but I will certainly try!

Posted by Matthew at 5:20 PM No comments:

Matthew
I'm a lawyer in Pittsburgh.